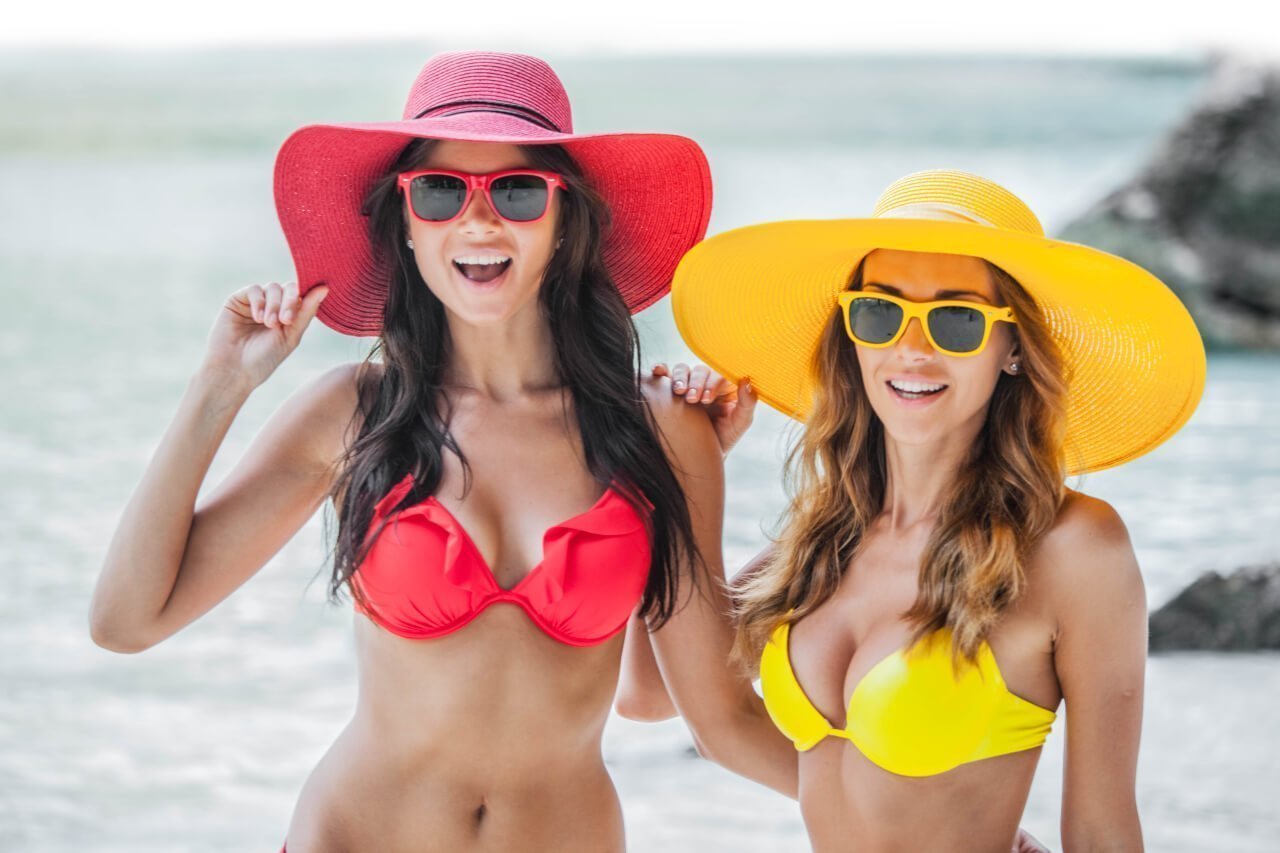 Do You Know Your Breast Shapes?

For some women, breasts are the most anxiety-provoking area of the body. This is partly due to their prominent position. They cannot be kept entirely hidden from view, like the vagina or penis. Breasts are out there in the open, the unmistakable statement of a woman’s sexuality.

It seems likely that it is this exposure that makes a growing girl feels so vulnerable about her breasts.

From these early anxieties can start a lifetime of breast-worry? Why do my breasts ache? Why are they lumpy? Should I wear a bra? Why do I dislike the idea of breastfeeding? What are my chances of avoiding breast cancer? It is hard to love any structure which causes so much anxiety.

Yet breasts are to love and to celebrate: By a partner, by a baby, by the owner of them.

There reigns in our culture a tyranny over the size of the sexual organs. In particular, breasts must appear large, the fuller the figure the better. It seems that it is a quantity that matters, not quality; the popularity of breast implants clearly demonstrates this. Yet implants can be felt; they are a means of “show and tell.”

This tyranny over sexual size does not only affect women. Men suffer from it too, and often more painfully. Studies suggest that men are even more worried over penis size than women are over breast size. The following is from a questionnaire into male problems of body image: All the male respondents, except for the most extraordinarily endowed, expressed doubts about their sexuality based on their penile size.

Yet size and sexuality are in no way equated. Such muddled perceptions are very sad. No man or woman should “express doubts about their sexuality based on sexual organ size.” Women with smaller breasts may perceive that they are less attractive to a certain type of man, but that is not the same as doubting one’s sexuality.

Breasts, like other body parts, are not perfectly symmetrical. Each has its individual shape and structure. Almost invariably, one breast is smaller than the other, the right one usually being a little smaller than the left. Asymmetry is so slight that it is not noticeable. Bra cups fit well enough on both sides. The condition runs in families. Some women enjoy their quirky, unequal state. Others are embarrassed by it.

Run the fingers down the center of the chest. Feel the hard sternum (breastbone), and the ribs attached to it. Breast tissue is present from the sternum and right into the armpit. Feel the ribs under the breast tissue. The chest muscles, the major and minor pectorals, cannot be felt. They lie underneath the breast tissue. In some female bodybuilders, the “pecs” can be almost as developed as those of a man.

There is no voluntary muscle (the muscle which can be worked) in breast tissue, so exercise cannot develop the breasts. Yet it does develop the pectorals and helps keep them firm. Pectorals which have been effectively exercised give a slightly raised pad beneath the breasts, and this can make breasts of all sizes more noticeable.

Breast tissue is soft, pliant, and naturally droopy. Support is provided by a covering of strong, elastic tissue, which lies just under the skin of the breasts. This support is an extension of the tissue which covers the pectoral muscles of the chest wall. The firmness of this covering gives the young breast its high, pert look. When the elastic weakens and relaxes with age, or is stretched after many pregnancies, the breast drops.

An areola is any colour part around a central focus (like the iris of the eye around the pupil). In breasts, the areola is an extension of the nipple, from which it spreads out in a radius of 1 to 2 cm. The areola and nipple are both heavily pigmented. As they are both parts of the same system, they are sometimes called the areola nipple complex.

The skin covering the breasts is smoother, thinner, and more translucent than skin over the rest of the body. Areola skin is particularly thin. At puberty, the areola and nipple darkening. In sexually-active Caucasian women, the colour can be grape-red, a royal purple, or a sepia-tinted brown. Eurasian and dark-skinned women have nipples that run the entire palette of lovely creams, cafe-au-lait, brown-as-a-berry, black.

Look for the little bumps sprinkled over the areola. These are sebaceous glands. They are called Montgomery’s glands because that is the name of the physician who first described them. Sebaceous glands produce sebum, an oily, waxy fluid that is secreted in small amounts. Sebum keeps the skin soft, supple and the hair shafts glossy and clean.

The sebaceous glands of the areola do not start producing sebum until puberty when they are stimulated by estrogen. It is not unusual for the pore of a gland to become blocked. The trapped sebum dries, hardens, and forms a waxy, yellow plug. To avoid this, use a towel to rub the areola-nipple complex after a bath or shower to remove any oily deposits and keep the pores open. The waxy plug can be removed by gently popping it out, and applying a very mild antiseptic; it can be left to surface on its own and get rubbed away naturally in the normal course of events.

Is it long and prominent, a wise Roman nose?

Is it cute and cheerful, a small rosy button?

Or is it inverted, a shy bashful maiden?

Why are nipples so appealing to men?

Find the openings at the center of the nipple. This is where the milk ducts come together inside the breasts. From puberty onwards, a trace of milky fluid is exuded from the nipples. If not washed off, it can dry and form a tiny crust. Nipple skin is wrinkled and has elastic properties, so it can be lengthened. If a woman wishes for more prominent nipples, she can pull gently to stretch them. They will become longer, though this takes a fairly long time.

An inverted nipple is usually the result of a minor birth defect. For some unknown reason, scar tissue inside the nipple has built up. Scar tissue is inelastic, with no give or stretch. The milk ducts cannot grow down to the tip. The tough scar tissue acts like a bow-string, pulling the nipple inwards, and tethering it in place.

Some women are not bothered by inverted nipples. Others feel great distress. There is often an inability to breastfeed. One option is to have the condition reversed by nipple extraversion. The tough, restraining tissue is cut away, freeing the nipple, which is then sewn down so that it stays in place. However, the procedure does not always work; surgery can leave external lumpy scars, and the inversion can return on its own accord. If opting for surgery, discuss these factors with the surgeon.

In most cases, inverted nipples are no cause for concern, if they have been inverted since puberty. However, if either nipple starts to turn inwards at any age after puberty, particularly after age 35, visit the physician promptly. It could be a serious symptom.

When breasts start to develop, they gain a special degree of sensitivity. This special sensitivity is even stronger in the areola nipple complex. Before a period, some women find the entire breast area feels exquisitely tender. In a few cases, she cannot bear to have her breasts touched; even her bra can cause a feeling of irritation. This extra degree of sensitivity subsides once the period flow starts. All this is perfectly normal.

Upon sexual arousal, extra blood flows to the breasts. It causes the nipples to swell, harden, and become erect. This is known as spontaneous erection; it is not under the control of the conscious will. The woman cannot stop it, even if she tries to. However, the nipples also spontaneously erect at non-erotic forms of stimulation: cold, fear, tension, or another non-erotic touch. Men are acutely aware of nipple response. A woman who dresses so that her nipples show through her clothing creates a magnet for male eyes. It does not matter that the nipple is erecting in non-erotic response, e.g., in response to the chilly wind. It is the fact that the nipple is seen to erect which is fascinating to men.

The excitement men get from nipple erection is one of the main reasons why breast size is far less important than some women, (and a few men) think. Breast action is what men value, a nipple that responds and erects eagerly for love.